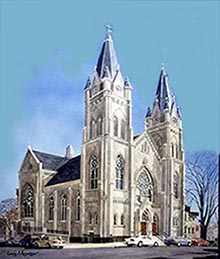 The earliest Polish immigrants of our city came mostly from the Prussian partition of Poland. Arriving in Wilmington in the later part of the nineteenth century, they were attracted to Sacred Heart Parish, which was staffed by German Benedictine priests. Realizing the need to minister full time to the growing Polish population, the Benedictine priests purchased two plots of land at the intersection of Linden and Harrison Streets.

The new parish was founded in October of 1890 and placed under the patronage of Saint Hedwig, the thirteenth century Duchess of Poland and Patroness of Silesia. Father Richard Aust, O.S.B. was our first pastor. The original building that served as both the church and school was built on the site of the present parking lot. It soon became too small to accommodate the swelling crowds that were immigrating to this area.

Taking over from the Benedictine administration, Rev. John S. Gulcz appointed a committee on June 30, 1899 for raising money to erect a new church. On November 9, 1899, plans were added to erect a new parsonage (rectory) at the same time. A then staggering amount of $90,000 was needed to complete the church and rectory. A collection of donations began with monthly door-to-door canvassing throughout the neighborhood. The area was divided into several districts and the smallest acceptable donation was one dollar a month. A total of $30,000 was collected and a loan was taken from the Equitable Guarantee and Trust Company in the amount of $60,000. It was paid in full on the eve of the Great Stock Crash, October 15, 1929.

Admiring a newly built church in Brooklyn, Father Gulcz hired the same architect, Brilmaier & Sons of Milwaukee, to design the church and rectory. The church is neo-Gothic in style. Massive granite forms the foundation, while the walls are of gray brick. Trimmings are of cut Bedford stone and galvanized iron, while Bangor quarry slate covered the roof. Its twin towers rise to a height of 135 feet, and a third steeple, smaller in size, was erected above the transept. It is the only church in the Diocese of Wilmington and the State of Delaware with twin towers.

The cornerstone laying ceremony took place on Sunday, July 3, 1904 at 3:30 p.m. Visitors from Chester & Philadelphia were met at the wharf of the Wilmington Steamboat Company by the various Church societies. A large parade was formed and marched to the bishop’s home at 3rd and Jackson Streets, proceeding to the old church on Linden Street, then to the site of the present church. The cornerstone was blessed and set by Bishop John J. Monaghan and assisted by Father Gulcz.