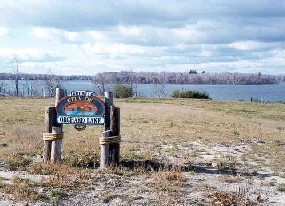 In the center of Orchard Lake is the Apple Island, named by the early Indians: Me-nah-sa-gor-ning - Apple Place. This is the isle where fact and fiction have formed fame and legend, to which the famous Ottawa Chied Pontiac fled after his betrayal at Fort Detroit. The legend which circulated among the tribes of the Chippewa, Potowatomi, Ojibway, and Ottawato, and which remains to this day is the love story legend.

A young maiden there became insane upon the death of the young chief to whom she was betrothed. Escaping from her guardians she would cross to the shore where he was buried, return to the island bringing his remains, and place them where his lodge formerly stood. Wearied of this utter and fantastic devotion, the tribe killed her at the advice if the medicine man. Offended by this profanity, the Great Spirit vowed his intention to destroy the entire tribe, and gave the Indian maiden complete power over it. The maiden could assumme her material form anytime she so desired between sunset and sunrise, and could compel the attendance of the tribe by beating the Indian drum. At this signal the warriors would await her arrival with the body of her dead chief. They would carry him to the council fire, and gather around to watch her caress him. later she would bear him back to his burial place on shore.

True fame, however brought to the island the story of Chief Pontiac. He was born to the Ottawa tribe in 1720. Selected to govern those tribe which lived in the Michigan, Ohio and Illinois area, he was preeminently endowed with outstanding courage, resolution, address, and eloquence. To these characteristics urged by a vehement ambition to their highest activity he owed his greatness. In 1769 he was killed, in Illinois while doing some trading. Legend falsely maintains that the body of this war-like chieftain was returned and layed to rest on Pontaic's Mound situated in the center of Apple Island. Upon his death the numerous and various tribes began to break up and disperse, moving to other places. When later white people setteld in this area, all of the Indians had disappeared, and the only remnants and traces which remained were the burial grounds located on the high northern bank of the lake and the old gnarled apple trees planted on the island by the Indians long ago.