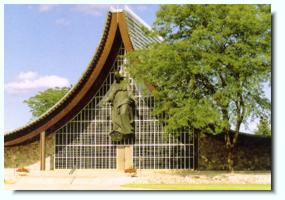 *   Life-size copper statues of Christ and His Apostles stand behind main altar designed by Joseph Jankowski (College graduate of 1940) and executed by.Clarence Van Duzer, both of Cleveland, Ohio; both were also responsible for the Madonna statue on the facade

*   Statue of Madonna, "Our Lady of Orchard Lake," gracing the front entrance, measures 25'high and 8' in diameter; consists of some 10,000 pieces of cut, hand-formed copper pieces, weighs more than 3,000 pounds and is suspended by 3/8" stainless steel cable from the arched roof

*   "Alpha Series" Carillon installed November, 1984, as a centennial gift to the schools through the efforts of the Centennial Committee

*   A new audio system, "Soundsphere," installed in May, 1985, uses a satellite-type speaker suspended from the ceiling.