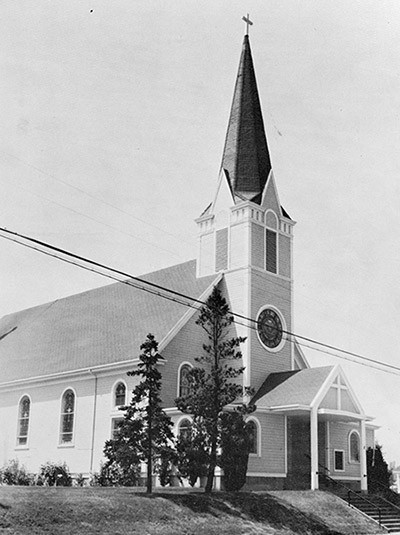 In 1892, chiefly through the efforts of the Polish National Alliance (Z.N.P.), the Polish people of Tacoma besought ecclesiastical authorities for a parish of their own and a priest of their na­tionality to direct its destinies. On May 4, 1892, Rev. Michael Fafara began the organiza­tion of a new parish, St. Mary of Częstochowa, established by Bishop Aegidius Junger. The name of the parish was changed to St. Stanislaus when the first church was erected on South 40th and Kay Streets in April, 1893, and continued to be known by this name until moved to its present location in January, 1924, when it became Sts. Peter and Paul Parish. Since 1923, the present pastor, Father Henry Różycki, O.S. B. has served the parishioners of Sts. Peter and Paul, except during the period from 1929 to 1931, when he was absent on sabbatical leave at Columbia University.

Many of the descendants of the original members are now parishioners of Sts. Peter and Paul Parishioners live in various parts of the city and vicinity. The parish is small, parishioners not many, but the activity and spirit of the parish is greater than many much larger in size and greater in numbers. Parish Societies are the life of any church and all new-comers are cordially invited and urged to join one or more of the active ones in the parish. Among these are: A.C.C.W., (Council of Catholic Women and Altar Society), C.Y.O. - Young Adults Club, C.W.V. - Catholic War Veterans, and C.C.D. - Catholic Christian Doctrine. We constantly need help in the religious education of the young, so the C.C.D, is a most rewarding and worthwhile society. There is also, always a need for qualified people to serve as choir members and altar boys.

Father extends his heartfelt thanks to all parishioners and societies for their cooperation and services. Each sacrifice that is made for the good of the church, is repaid by God with special graces and blessings.