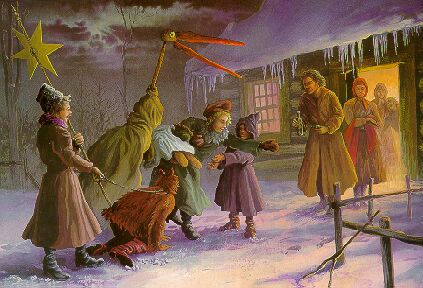 Holiday customs and traditions, art, music, literature and drama, are important expressions of a nation's culture. Though the art, music and literature of a country become a part of the heritage of each citizen, perhaps only a few of the especially able and talented participate directly in them.

The holiday customs, on the other hand, belong to everyone. They are the part of culture which most affects the color and the spirit of the people's lives. Everyone knows them and takes part in them. Perhaps we can understand this best when we realize that it is often just such customs and traditions which immigrants from the "old country" preserve long after memories of other things have faded.

The religious heritage of the Polish people has strongly influenced their calendar of holidays. Even some of the holidays which now seem entirely secular in nature have roots in religious tradition. Some of the customs by which these holidays are celebrated, however, go back even further than the Roman Catholic Church in Poland. They originated in the pagan rituals of the earliest peoples to inhabit the Central European Plain.

When Poland adopted Christianity in the 10th century, the Church adapted the established traditions of the native people to the celebration of its own liturgy, instead of imposing completely new and foreign customs on them.

The Church thus become the primary keeper of the nation's folkways and has successfully preserved them through a thousand years of chaotic, often times tragic history. In spite of the tremendous social upheavals of the past five decades, they are still maintained today, especially in the countryside.