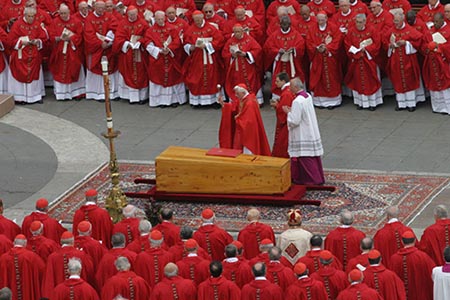 The Christian meaning of death is revealed in the light of the Paschal mystery of the death and resurrection of Christ in whom resides our only hope. The Christian who dies in Christ Jesus is "away from the body and at home with the Lord." (CCC 1681)

For the Christian the day of death inaugurates, at the end of his sacramental life, the fulfillment of his new birth begun at Baptism, the definitive "conformity" to "the image of the Son" conferred by the anointing of the Holy Spirit, and participation in the feast of the Kingdom which was anticipated in the Eucharist- even if final purifications are still necessary for him in order to be clothed with the nuptial garment. (CCC 1682)

The Church who, as Mother, has borne the Christian sacramentally in her womb during his earthly pilgrimage, accompanies him at his journey’s end, in order to surrender him "into the Father’s hands." She offers to the Father, in Christ, the child of his grace, and she commits to the earth, in hope, the seed of the body that will rise in glory.[184] This offering is fully celebrated in the Eucharistic sacrifice; the blessings before and after Mass are sacramentals. (CCC 1683)