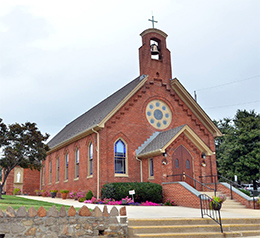 This parish is started in the summer of 1890 as an outgrowth of St. Mary Star of the Sea parish (English speaking) of South Baltimore. Its organizer was an assistant of the Star of the Sea parish the Rev. J. R. Matthews, who died a Roman prelate in 1935 in Washington, D.C. From March 1893 to January 1895 the Rev.Thomas E. Gallagher was pastor. Then from that date until June 1903 the Rev. A. A. Duszynski was pastor. An influx of non-english speaking people about 1895 caused his appointment here. Poles started to settle here toward 1900. Father Duszynski resigned in 1903 and was succeeded by the Rev. F. A. Marzecki, who was pastor until the 29th of July 1909, date of his death. Father A. F. Marzecki is the one who started to refer to this parish as a Polish one and this went in the Polish Catholic press and even in publications like the Catholic Encyclopedia. The Church authorities never look upon Saint Athanasius as a Polish parish as the membership of it is composed of several different groups. The Poles however constitute a good third of the parish population. They have three Church Societies of their own, a National Home, a Men's Society and a group of the Polish National Alliance. The Parish has a mixed character and there is no parochial school.