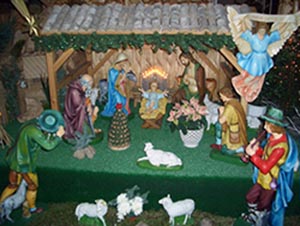 The Christmas holyday and the family Vigil meal have a very solemn character. It is relived, especially by the Poles, as a family holyday, specifically in the observance of Christmas Eve with its customs and traditions.

In almost every home a Christmas tree is set up and decorated. The tree is a Christian symbol of the tree of Paradise. With its life and green branches, it became a symbol of Christ as the "Tree of Life." Its adornment with candies, lights, and ornaments symbolizes Christ, the "Light of the World." Beneath the tree, a Nativity crib is usually set up to commemorate the birth of the Child Jesus in Bethlehem. Presents are also added around the crib to signify the Redeemer's grace for the family and a sign of joy at His coming.

According to an ancient tradition, the Vigil observance begins at sunset with the appearance of the first star. The family is then summoned to a common meal. Although it is a simple meal, it consists of an odd-number of meatless dishes, all of which have a symbolic meaning. The table is covered with a white linen cloth with a thin layer of hay and wheat grains beneath to remind the residents that the Infant Jesus was laid on hay in the manger. A sheaf of wheat is place hi "God's corner" of the room.

One extra place setting at the table is reserved for an unexpected guest. Zofia Kossak, a renowned Polish writer, explained this, "Whoever arrives at a Polish home on this holy evening, will occupy this place and will be received as a brother." The extra place also expresses the sincere remembrance of all the dear ones, who could not spend the holidays with the family, particularly those who have departed this world. Some also believe that Jesus Himself comes to the Vigil meal this evening and occupies the vacant place.

In Poland, as in no other country, the Vigil meal has a character of a religious rite. That is why the head of the household or some other person reads a section of the Gospel about the birth of Jesus. With the appearance of the first star, after a common prayer of blessing of the food, all share the "oplatek" (a white unleavened wafer made of flour and water). Each member breaks off a piece of the other person's "oplatek" while expressing their Christmas wishes to each other.

This custom is exclusively practiced in Poland. The parents begin the ritual by sharing the oplatek with each other and then the children and all present follow in the same manner.

In the primitive Church the faithful participating in the Eucharistic Liturgy would bring bread as an offering. Some of it was set aside for the Consecration for distribution at Communion time. The rest of the bread was blessed and given to the participants to take to the homes of those who could not attend the service. In tune this practice was abandoned, but is still retained hi the Orthodox Church.

This custom survived in Poland in a changed form. During Advent the priests would distribute aspecially prepared and blessed bread, the "oplatek," to share at the Vigil meal. At the tune when Poland lost her independence with the partition of the country by Russia, Germany, and Austria, the Catholic Church became the mainstay of the life of the nation. Frequently, families with separated and exiled members in Siberia and those forced to emigrate after the insurrections, would send their dear ones a present at Christmas always including the oplatek. In this way it became a symbol of the holidays and the sharing connoted feelings of unity, good will, and friendliness.

Today, while breaking the oplatek, family members ask each other for forgiveness. The crib, the hay, the oplatek, and the tree, all create a religious and holy atmosphere in the home. By asking for forgiveness for their faults, hurts, and offenses, the members break what is most difficult to overcome: anger, hatred, and egoism.

An interesting fact to recall is that the town of Bethlehem means "House of Bread." This is an additional symbolical aspect of the "oplatek" as a sign of Jesus Christ and His human birth. Colored "oplatki," usually pink, and the leftovers from the meal are taken to the animals, so that, they too, could share in the joy of the birth of Christ. A legend tells us that every Christmas Eve the animals who were present at the birth of Jesus in the stable, speak in human voices about all the wonderful events accompanying His birth.

Blessing of the Manger or Nativity Scene

Blessing of the Christmas Tree